Photography is a medium that sometimes acts as a time machine. Joseph Agius talk to the photographer NICKY CONTI on his current exhibition, Memories of my islandat the Malta Postal Museum.

JA: American photographer Paul Strand once said, “The artist’s world is limitless. It can be found anywhere, far from home or a few meters away. He is always at his doorstep. Is this the philosophy you follow? Is there material worth studying just outside one’s home, in addition to the abundance of material inside domestic walls?

CN: Yes, it is a philosophy that I follow; however, the question with me is, where is the house? Having lived away from “my island” for over 17 years, I find it difficult to think of Malta as my home, and yet when I speak to strangers and my friends in the United States, I always refer to Malta. as “house” or at least, I say: ‘I return (to visit) the house’. I guess I will always consider Malta my home country since it’s where I’ve lived the longest of my life so far, especially after living in three different countries since leaving in 2005.

Photography develops my sense of sight and observation. I never take for granted what I see on the street, especially in New York, where I have lived for 10 years. Fun fact: we have a “safety” slogan in New York that says, “If you see something, say something.” In my case, if I see something, I capture it. New York gives me a visual playground as soon as I step out of my apartment in Queens.

This is where I started street photography, and four years later, the city and its boroughs still enchant me as I continue to photograph urban scenes creatively. Visiting Malta to be with my family gives me the opportunity to rediscover places, buildings, streets that I knew and took for granted when I was a child, teenager and in my 20s. I see ‘my island’ with both an indigenous and touristic eye as old familiar places appear in a new light.

JA: I have the impression that you look almost effortlessly for pattern and geometry in your compositions, like the photographers Paul Strand, André Kertész, Henri Cartier-Bresson and Lucien Clergue. The public is invited to enter the image. Are these photographers models? Do you have any other photographers to mention?

CN: They are all photographers that I greatly admire, and among many others, there are a few who have greatly influenced my work. Primarily, there is my first street photography tutor, Alan Schaller, a young London-based and now world-renowned street photographer. I had noticed his work on Instagram in 2018, and in October of that year he announced a weekend class in New York. I was the first to register. Alan was a revelation. His tutelage and his passion for street photography came at a time when I was still trying to find the “voice” in my vision. I still apply the same capture and editing techniques that I learned from him. 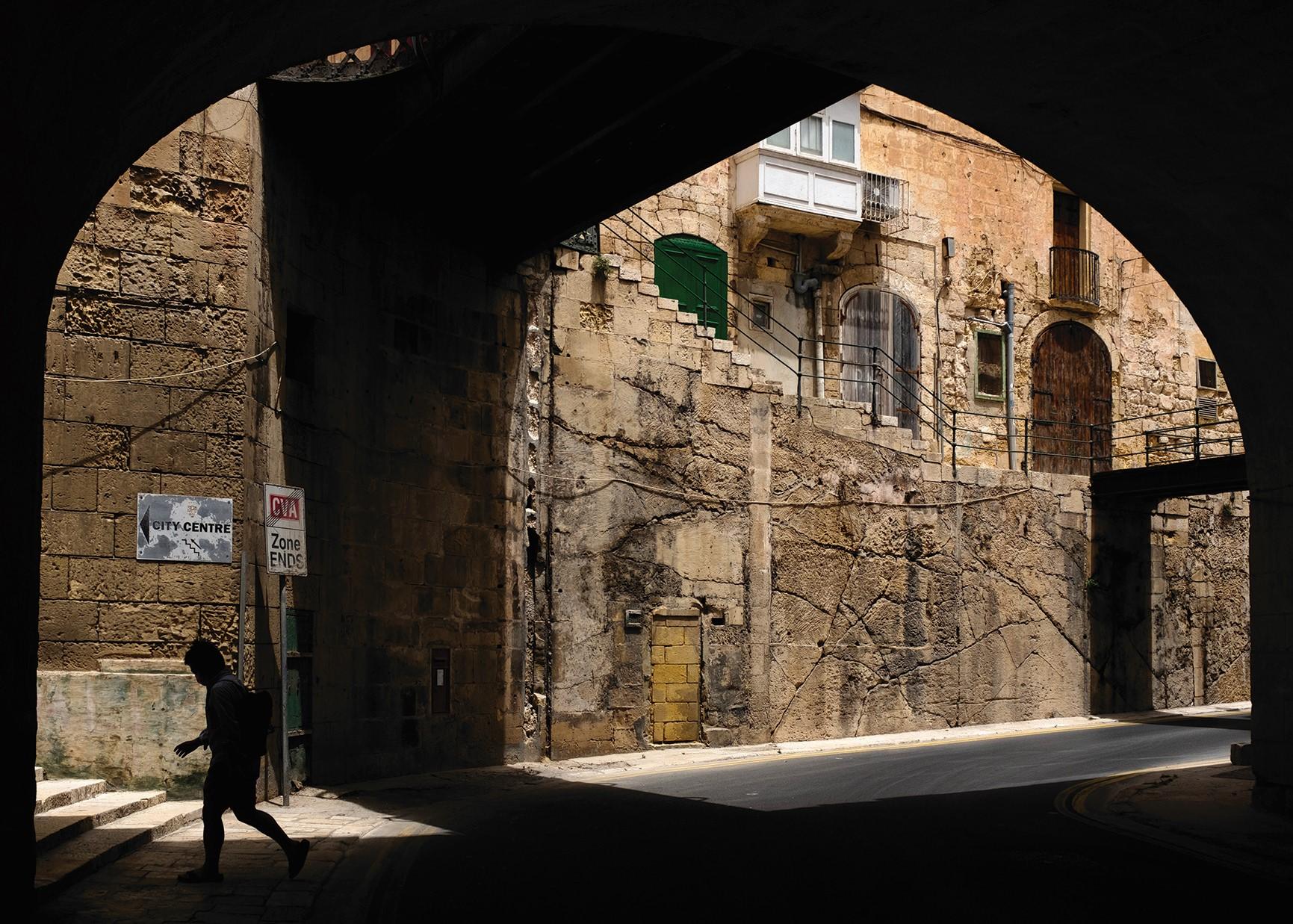 I’m also a big fan of Ray Metzker who is best known for his photos of Philadelphia and Chicago between the 1950s and 1960s. I heard about him when a critic once compared my photography to Metzker’s for the use of high contrast and a chiaroscuro effect in an urban environment. I was immediately drawn to Metzker’s work and have been inspired ever since.

Last but not least is our very own Guido Stilon. I discovered Stilon through Magna Zmien in early 2020. I was not in Malta at the time, but my father was lucky enough to see the exhibit at the Malta Postal Museum in Valletta just before the lockdown. I still have a copy of the catalog that I treasure. Stilon’s photos are fascinating accounts of our society in the 1950s and 1960s. I admire his eye for architecture and urban spaces, the use of light, and the framing of individuals and people in the streets.

JA: The title of the exhibition Memories of my island indicates a memory, an awakening. In your words: “Memories are never one hundred percent accurate. We only remember what was meaningful to us at the time, emphasizing some details and obscuring others”. So is this exhibition about selective amnesia, the “forgotten” parts of memory being concealed by “dark shadows, negative spaces and silhouettes? Does being away from the island for a long time, coming back to actually revisit the backdrops of those memories lead to disappointment when time tends to degrade treasured memories? Does the harsh reality of the country frighten you? 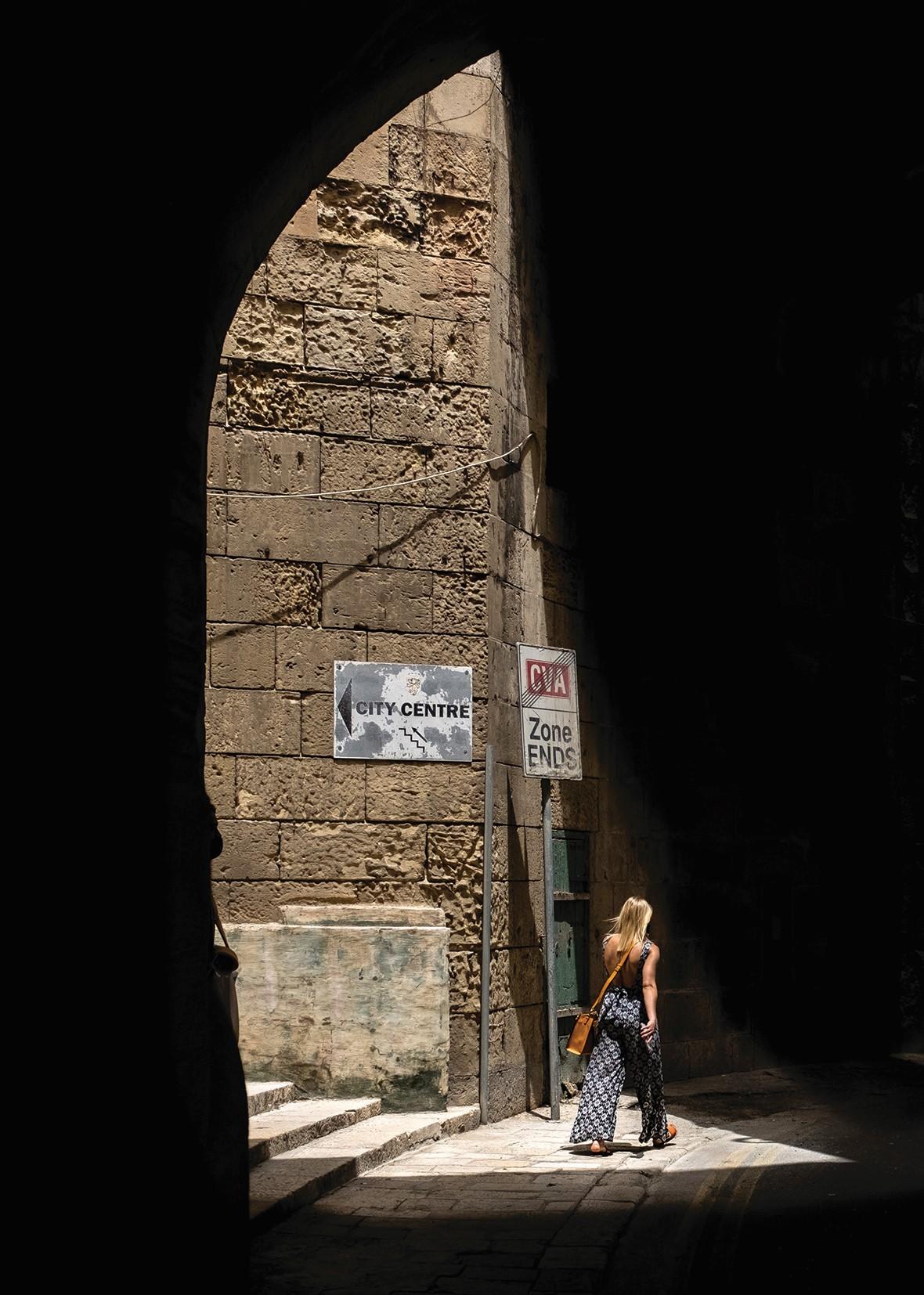 CN: The identity of my island resides in the centuries-old historic streets, houses and places. This identity forms mine. It’s what shapes the way I see myself and the world. The soulless and sometimes senseless ever-growing construction erodes our true and unique identity. You could say that I use negative space and shadows to mask the dissonant and austere modern buildings that invade.

At the same time, I am selective in what memories I want to recreate and remember. I fear losing sight of what constitutes our Maltese heritage and culture. This fear prompts me to grab my camera and wander around capturing sites I recognize and remember from my early years. In doing so, I feel like I am accomplishing two things: rekindling my Maltese identity and capturing typical local street scenes in a photograph.

JA: You represent people in silhouette; their anonymity, however, adds much to the narrative and magical quality of the plays. It’s as if you have to “silence” humanity, even if the reality is noisy, like in your photo of what looks like a village market. Am I off the mark?

CN: I like to use alternative means to capture humans in everyday street scenes. I challenge myself to create out-of-this-world magical moments by experimenting with different angles, perspectives, and finding geometric patterns in which to frame people in a scene. 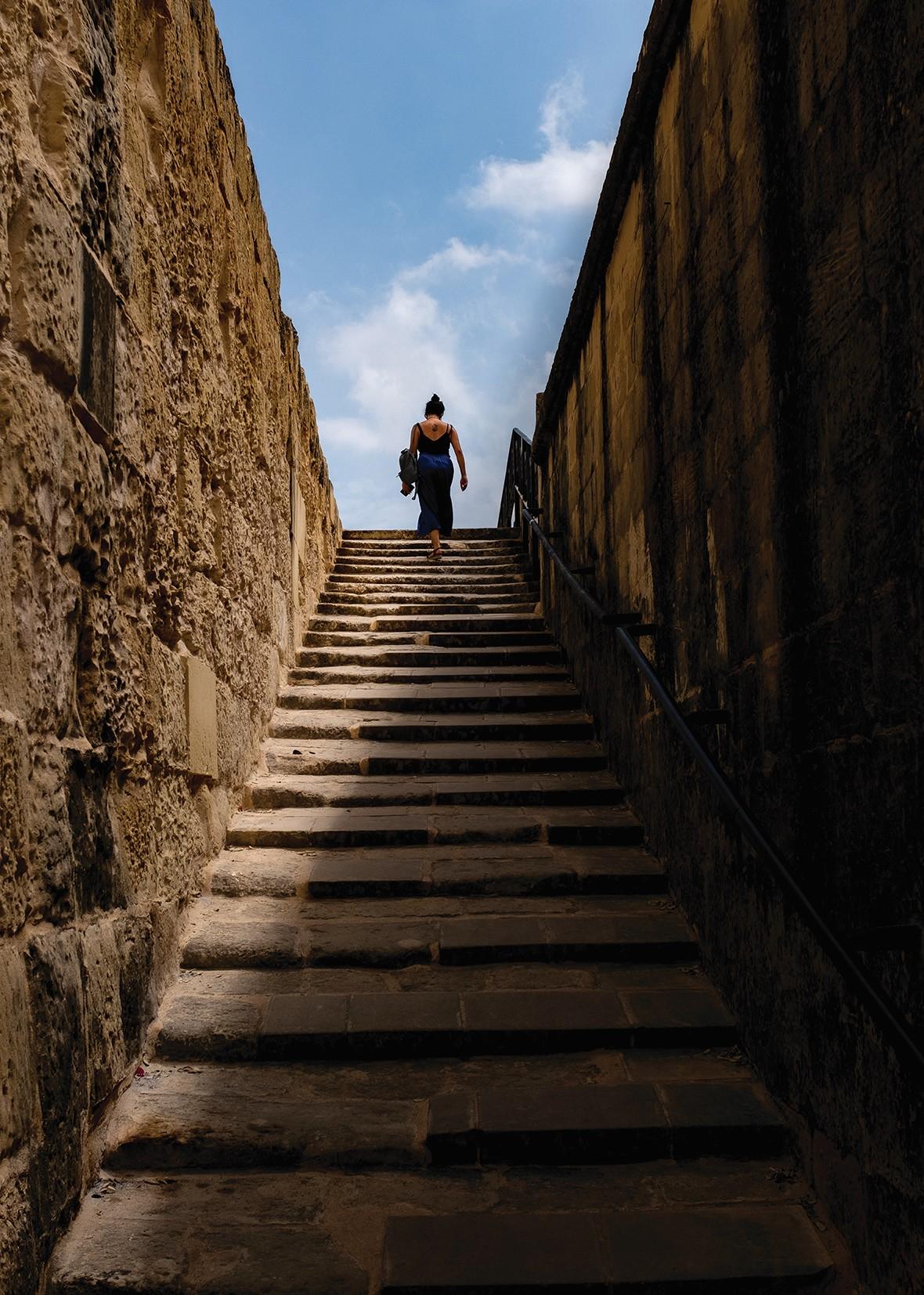 Sometimes I put a person center stage, like in Downtown (pun or not!) as well as The staircasewhile in other photos people become the backdrop, just like in market day. I don’t like to disrupt the moment by asking or making the people I photograph aware. It’s also because I don’t ask their permission that I use backlighting, clipping and shading to anonymize them.

JA: When we mention street photography as a Maltese genre, we immediately think of David Pisani, the photographer-artist who has documented Valletta for almost three decades. One could say that this seminal documentation of the gentrification of our capital can be defined as a kind of portrait. When does street photography become portraiture?

CN: There is more than one side to street photography. The one I’m pursuing is more in the fine art sense; it focuses on the play of light in harmony with architecture, street and urban spaces, creating a unique and contemporary visual. I would describe David Pisani’s collection of Valletta endangered a cityscape photo documentary as it depicts the state of the city as it is. I find it similar to Fred Lyon’s photos of San Francisco and Berenice Abbott’s photos of Manhattan. I wouldn’t necessarily consider them portrait photography since the empty landscapes are the main subjects here, not the people.

On the other hand, photojournalism brings people into focus and captures them in the heat of the action, such as protests, wars, events, ceremonies. Last but not least, I would classify anthropological and social photographic documentaries as an aspect of the portrait of street photography.

I challenge myself to create extraordinary magical moments

Guido Stilon and Joseph Darmanin (‘gululu‘) were past masters in this field. They both observed and photographed the daily life of the Maltese in the streets. In doing so, they articulated facial expressions, fashion, gestures, body language as well as social behaviors. They are also historians in many ways, as Vivian Maier, Robert Frank and Gordon Parks were in the United States.

JA: Valletta is a city of grids and patterns; New York City, the city that has been your home for the past few years, also has a grid-like structure. What other photographic parallels do you find? Are the two cities both photogenic and prima donna?

CN: Short answer, yes, both cities are photogenic prima donnas, and despite their grid-like structures, they are completely different in many ways. Valletta offers centuries-old, baroque-style, honey-colored stone buildings in round, squat shapes and sizes, while Manhattan is mostly modern, tall, lean skyscrapers that cast endless shadows . Most of them are made of glass, which reflects softer, softer sunlight onto the streets and a light that is different from the harsh Mediterranean sunlight. 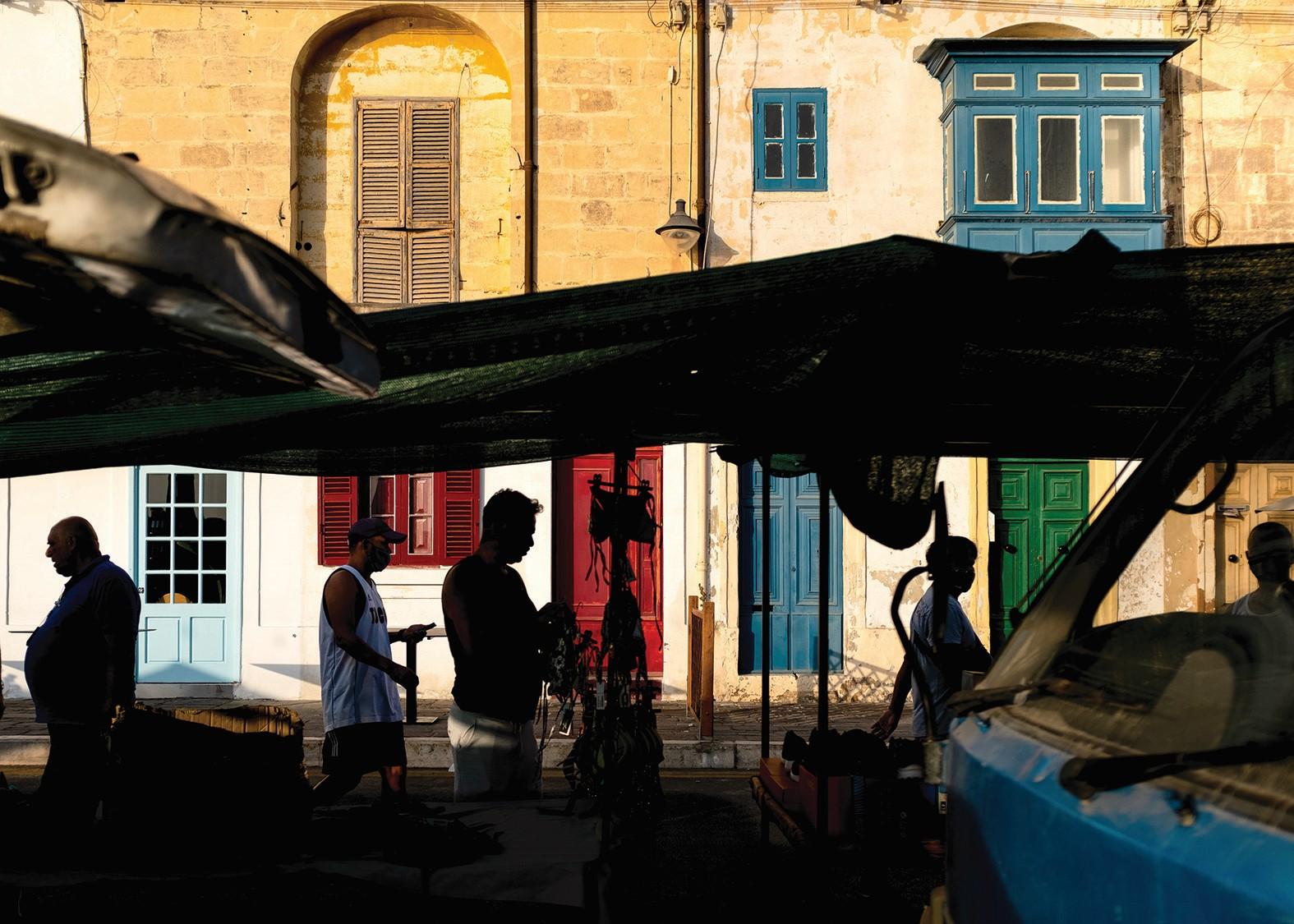 Unlike Malta, which basks in the sun most of the year, New York changes with each season. Winters are special. They bring fresh snowfall that sweeps the city away and transforms it into a wintry white wonderland, perfect for monochrome captures. The New York subway is just another ball game. I spend hours underground photographing passengers, trains, anything that moves under the cold neon lights that serve as perfect beacons. The people on the street are the same but different. There are more people in Manhattan, so it’s also harder to photograph because I avoid crowds and watch out for singles.

I generally apply the same image capture and editing techniques when walking around both cities, however, I am a different photographer; in Valletta I’m a romantic nostalgic expat, in New York I’m an adventurous lonely soul. Whenever I travel to other countries and cities, I become a curious street cat, feeding and feasting on the novelty that meets my gaze.

Independent journalism costs money. Support Times of Malta for the price of a coffee.

The BBA Photography Prize rewards international photographers, whatever their background, with several prizes incl. a solo exhibition, cash prizes and more. The competition includes two exhibitions – one at Berlin Photo Week in September and one at Kühlhaus Berlin in October. Berlin Photo Week is a prestigious community event and industry fair. Kühlhaus Berlin is […]

2021 is coming to an end and we are all recapping it. The landing of the Perseverance rover on Mars was one of the major events of this crazy year. The NASA rover returned quite a few photos over the past year, and it recently shared the ones the community liked the most. Each time […]

vivo announces the launch of the X70 series in the Middle East, advancing professional mobile photography with ZEISS

vivo today officially launched its X70 series of flagship professional photography smartphones in the UAE, Qatar, Bahrain, Kuwait and Oman. The X70 series – comprised of the X70 and X70 Pro – marks the next chapter in the global in vivo imaging partnership with ZEISS and their shared quest to create the ultimate mobile photography […]