I recently was dragged to enjoyed a trip to the NSU Art Museum in Fort Lauderdale, which featured an exhibit by pop artist Keith Haring. My wife is an artist as well as a licensed art psychotherapist (1), and she was pointing out all sorts of not-so-hidden imagery in Haring’s work — things my “art pea brain” couldn’t fathom. It was fascinating. More on that later.

What does the work of a well-known artist, who began his career spraying graffiti in the subways of (where else?) New York, have to do with Magic Johnson and the stinky Lakers? A lot. It’s all about timing.

Magic Johnson lands on the Lakers

The Lakers’ March 3 game halftime interview was pretty interesting. The team, which had lost three straight games, including a 28-point blowout thanks to the horrid Pelicans, was playing like it had Buicks strapped to its back. Magic Johnson, arguably the greatest Laker of all time and former team owner, told ESPN analysts, “The Lakers look absolutely terrible there.” He was right. The team is now 19-29 and has lost 16 of its last 22 games.

Maybe the Lakers looked terrible, but Magic certainly wasn’t; he looked great, especially for a man who very well could have been dead 30 years ago were it not for a fortuitous moment and great science. Much like his assists, the moment Johnson contracted HIV was “flawless”. He was diagnosed with HIV in late 1991 and managed to hang on long enough to gain access to the first generation of miracle AIDS drugs. (2) who changed the face of HIV/AIDS. Magic started taking these drugs just in time. If it had taken another five years to discover and develop these drugs, he is unlikely to be alive today.

Earvin “Magic” Johnson, 03/03/22. Picture: YouTube. Not bad for being HIV-positive for three decades.

Keith Haring was not so lucky.

Haring began to draw “graffiti” with chalk (3) murals in the New York subway, but his talent and his unique style imposed themselves; between 1982 and 1986 he became widely known for his style and talent, appearing in numerous museums and galleries. Perhaps his most famous work (at least for New Yorkers stuck in traffic) is “Crack is Whack”, which he painted on a handball court, plainly visible to any drivers sitting motionless on the awful FDR Drive.

Here are some other examples of his work.

Haring was diagnosed with AIDS in 1987. Even high-profile amateurs like myself can see how Haring’s mood, as reflected in his art, darkened when his health began to decline. If you look closely, there are fairly obvious references to birth, death, illness, lack of time, and other disasters.

It’s unclear when Haring was first infected, but it’s safe to assume it was probably something like five years before Johnson, maybe more. Those years cost him his life. To understand why this is so, we need to look at the timeline of AIDS, since 1981. I have modified the table below, originally published by the CDC, for clarity, in particular to highlight the difference in results of AIDS patients based on where they contracted the virus. 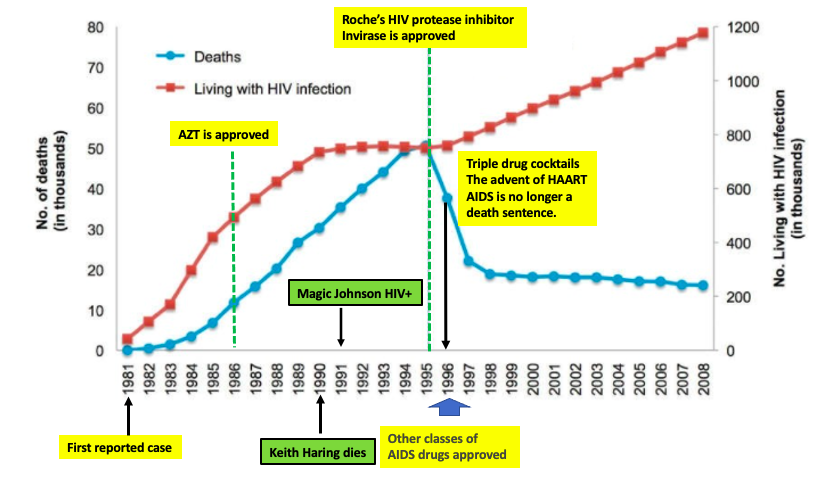 It may not be obvious, but Invirase and Paxlovid, arguably two of the most important drugs ever discovered, work the same way. Both drugs work by inhibiting viral proteases responsible for HIV and COVID replication, respectively. It is not a coincidence. The technology used to develop Invirase was used a decade later, resulting in two FDA-approved hepatitis C protease inhibitors – the first direct-acting antiviral drugs to treat hepatitis C. Similarly, research in the early 2000s (for the original SARS) led to the discovery of Paxlovid two decades later. If Pfizer hadn’t been doing research back then, we wouldn’t have Paxlovid today; It would be years from now.

It’s all about timing.

(1) There may be some irony in my being married to a therapist.

(3) Haring did not consider himself a graffiti artist.

On Monday, the San Antonio Zoo posted an update on its Facebook page about La Llorona, a corpse flower kept on zoo grounds. Although the bloom was not “fully successful”, the zoo seems to have learned a “life lesson” from the event. In recent days, the zoo has released information about the plant emitting odors, […]

The Diverse Curriculum, launched in October 2020, includes more than 50 modules that can be adapted to student needs and used at any time. To date there have been 2383 registrations worldwide including schools from Ireland, Spain, Netherlands, Portugal, Switzerland, Australia, Malaysia, Nigeria, Egypt and Brunei. Notes to Editors The new lesson plans can be […]

This bustling Miami home is a lesson in living with art

Once upon a time at Art Basel Miami Beach not too far away, before the pandemic upended social gatherings, a creative crowd gathered at the Shorecrest home of art dealer Nina Johnson and singer-songwriter Daniel Milewski. Musician and concept artist Terry Allen had set up his keyboard in the living room, where an audience gathered […]